D. Cousins has shared with us his memories and photos of Harnwood from 1962, during a 5 month stay for TB treatment.

“Den and I were the youngest patients at the time. He was into the music scene and close friends with Dave Dee and his gang. I remember him finding a way to connect his guitar to the bedside radio feed, a short-lived experiment that incurred matron’s wrath. The circular decorations on the wall behind him (see photo below) were fashioned from multiple cigarette packets by an elderly patient ‘Jock’ who also sold them to visitors to fund his habit!

Once one was considered fit enough, a graded exercise regime was introduced, culminating in putting competitions on the green at the back of the hospital which overlooked the City. I’m on the left of this picture (see below) and the chap on the right was a keen golfer. On the day of his discharge he celebrated by driving a ball towards the Cathedral, a spectacular shot to behold.

The other photos are of Kitty in the high tech kitchen and an orderly doing a thorough floor clean. These were shot on my Rolleiflex twin lens camera, so I shot the floor cleaning photo by leaning out of the other side on the bed.

I also remember that I tamed a Robin to the point where he would fly in the window and feed from crumbs on my bed table. This was frowned upon by matron, but I never established whether it was because I or he might become infected!” 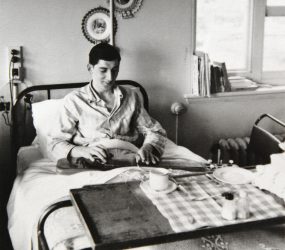 Den Jessey in ward bed with his guitar 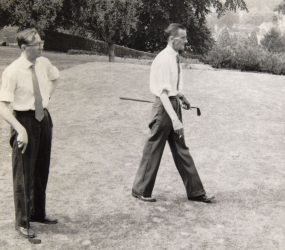 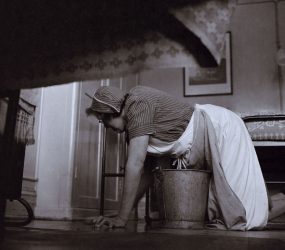 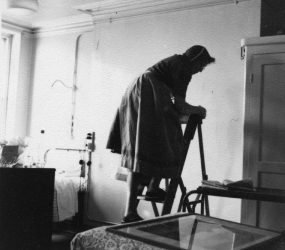 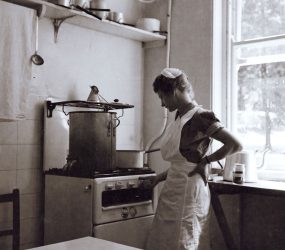 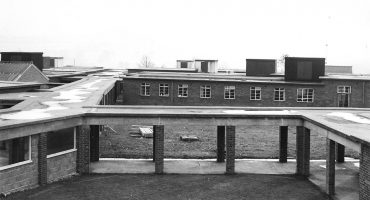 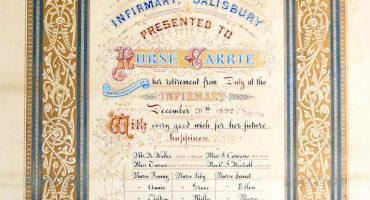 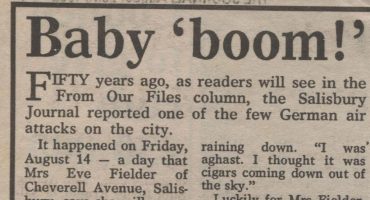