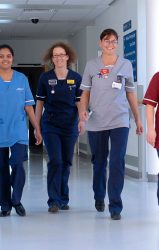 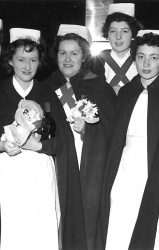 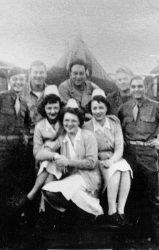 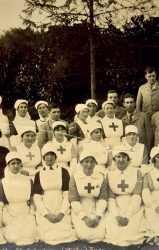 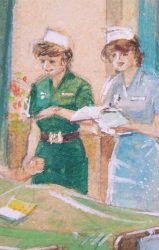 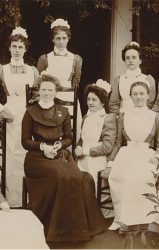 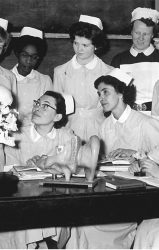 Scroll down for image information and timeline answers

Uniforms B – This black and white photograph was taken of a group of nurses at Odstock Hospital (now Salisbury District Hospital) in early 1950s , shortly after the formation of the National Health Service in 1948. Their uniform includes a dark blue wool cape with red cross straps that fasten at the back with a button. The cape was lined with red wool fabric and were warm in winter. Many nurses recall that at Christmas they used to turn their capes inside out so they appeared to be red capes. They are also wearing the white starched caps (see our instructions to make your own!)

Uniforms C – This black and white photograph was taken during WW2 in 1942 at Odstock Hospital, built as a US army field hospital to treat casualties returning from war in northern Europe. (Now present day Salisbury District Hospital) You can see in the photograph nurses pose alongside the American soldiers between the Nissen huts, with the curved roof, that were the temporary wards of the hospital.

Uniforms D – The panoramic photograph shows nurses and soldiers at the Harnham Red Cross Hospital during 1918. Women Voluntary Aid Detachments (VADs) volunteered as nurses and ambulance drivers during World War 1. You can see 3 women ambulance drivers. They wore a dark coloured uniform (middle left) Unlike nurses who wore white to be spotlessly clean, the dark uniform was needed as driving open-topped World War 1 ambulances meant they were out in all weathers and got very dusty or muddy. Running repairs on the engines at all times of the year was dirty work. Ambulance drivers (men and women) were more likely to have come from more well-to-do families, as very few people at this time had access to motor cars or were able to learn to drive.

You can also see the soldiers who are wearing a hospital patient uniform whilst they were recovering in hospital (top right) They were issued with a blue ‘hospital suit’ uniform that consisted of a blue single breasted jacket with white lining to be worn over a white shirt, red tie and blue trousers. They continued to wear their own military cap with regiment badge. It seems this signified they were wounded patients and not absconding. Also, being a fairly cheap flannel material, it was easy to produce in large numbers and to launder too.

Uniforms E – During a hospital stay, illustrator Chris D Watkiss painted and sketched daily ward life. Entitled ‘Queensbury Ward, Salisbury Infirmary Oct 1982’ the watercolour on paper drawing is surrounded on the mount by many smaller studies of nurses and patients on the ward.

Uniforms F – Photograph from around the turn of the 20th century at Salisbury Infirmary. Matron at the time, Mary McMasters, is seen posing with her nursing team around her – notice how the uniforms contrast with the scrubs worn by nursing staff today.

Uniforms G – In 1953 Harcourt House, close to Salisbury Infirmary in Crane Bridge Road, was bought and converted into a Training School, continuing until its closure in 1992. The image of nurses completing anatomy training is from the 1960s and provide a glimpse of nurses in training at the time. 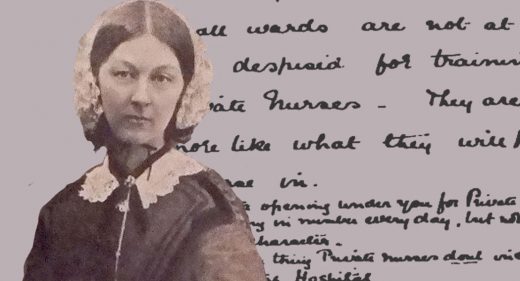 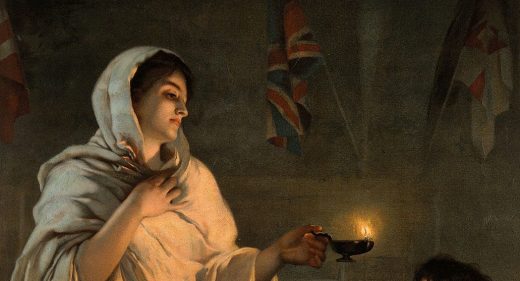 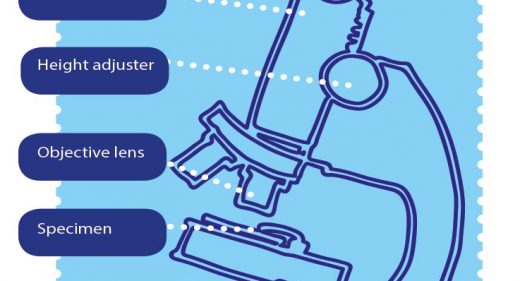