We’ve pulled out some photographs and other items from our archive help to show how this now commonplace hospital technology has developed over the last century to benefit patients.

The first photograph below shows the Radiology Department at Salisbury General Infirmary 1992. The clinical machinery is in stark contrast to the highly floral wallpaper! The image is of an X-ray table and associated equipment including an X-ray tube (right of the image) and upright bucky (left of the image). The Bucky is a grid device invented by German radiologist Gustav Bucky that enhances the quality of X-ray images. The grid is positioned on the opposite side of the patient from the X-ray tube to reduce the quantity of scattered X-rays that reach the detector. This increases the contrast resolution and the visibility of softer tissues.

The second, third and fourth images below, shows a mobile X-ray machine dating from around 1948. It would have been used by the newly formed National Health Service hospital at Odstock Hospital (now Salisbury District Hospital.) This device was manufactured by Newton Victor Ltd. It stands over 6 feet tall and has four small rubber wheels to move the equipment around. Mobile X-ray units were used to enable a wider range of patients to be examined. 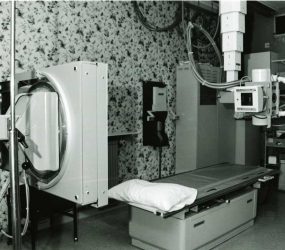 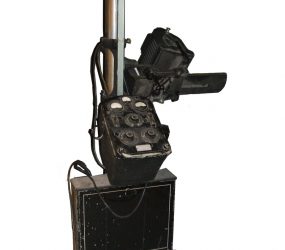 Close up of the switches and dials 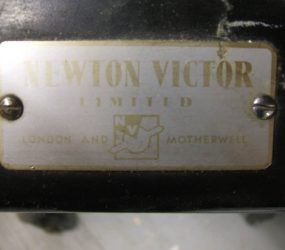 During an X-ray only a very small part of the patient’s body is being examined and will only be exposed to a low level of radiation for a fraction of a second. Normally the amount of radiation during an X-ray is the equivalent to a few days exposure to natural radiation from the environment around us. However, staff who work every day in the Radiology department need to wear protective clothing. In all the images below they are wearing lead coats, which are very heavy from the metal lining. Lead’s high density blocks the X-rays reaching the body.

In the first image below dated November 1992, the doctor is performing a fluroscopic procedure on a patient. The patient swallows a contrast medium and it is watched on the screen as they swallow. Images can then be taken. He and his colleague are wearing lead coats to protect from the radiation.

The second image below dated 1995, is a view of the Radiology Department. A patient is face down on a table with the image intensifier table being tilted. A staff member wearing a blue lead coat is stood by the patient. Two more lead coats are seen hung on the wall. 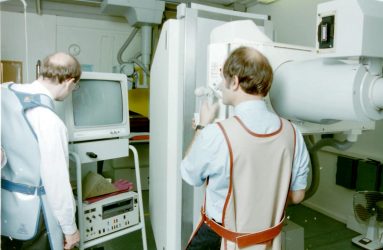 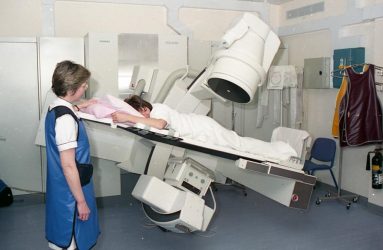 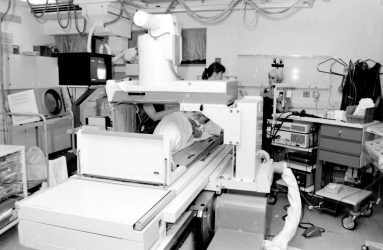 A selection of images from 1960s onwards show the advances in how X-rays are viewed. The first image below, from a photographic slide dated 28th October 1993, shows a view of an operating theatre. A patient is covered in green sheets. There is an anaesthetist, a surgeon and nurses in attendance. Equipment on trolleys is also covered in green sheets and X-rays are visible on a viewer in the background.

The second picture below is of a patient and staff in the X-Ray Department of Salisbury General Infirmary during a royal visit by HRH Duchess of Kent on 11th November 1970. The patients X-rays are shown displayed on the viewer next to the treatment couch.

In the third photograph below theatre staff demonstrate tools used in the newly refurbished operating theatres at Salisbury District Hospital in the 1960s. You can see the X-ray viewer displaying images used during surgery. The X-ray image on display shows this patient had metal hip implants as these show up whiter than the bones.

The final image below is a colour photograph dating from 2006 showing medical staff examining a chest X-ray image on a computer screen. This digital viewing of X-rays has now replaced the old viewers seen in the previous images at Salisbury District Hospital. 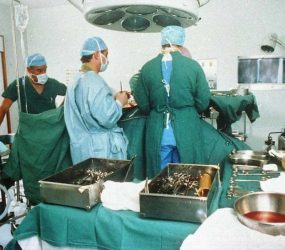 X-rays on viewer in operating theatre, 1993 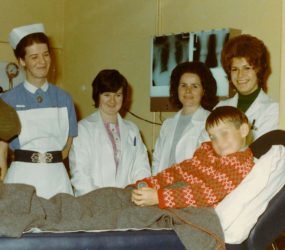 X-rays on viewer next to patient's bed seen during royal visit, 1970 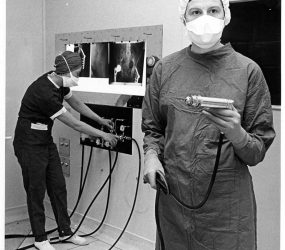 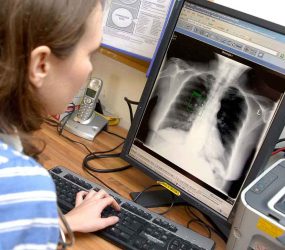 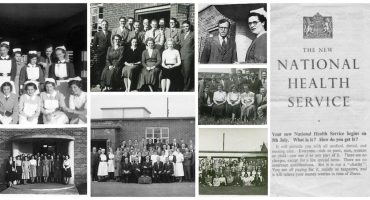 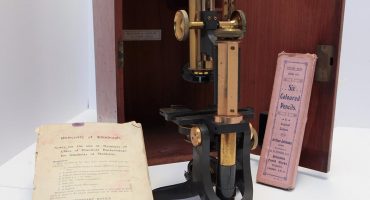 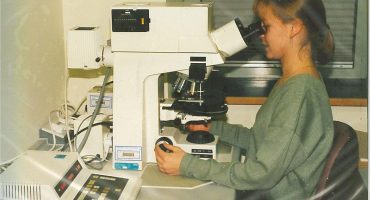